Having a strong visual effect, Pinterest is the go-to source of inspiration for a range of things, from decoration projects to outfit ideas. Everyone on the internet knows and loves Pinterest, that’s quite sure.

Being a social media platform on its own, Pinterest turned into one of the most powerful brands over the years.

Seizing the opportunity of becoming the world’s largest source of inspiration for all sorts of industries, Pinterest has understood how to bring marketing into the game.

For example, did you know that half of the U.S. users actually buy from Pinterest?

But all in all, how did Pinterest become so popular?

We decided to make an inquiry and dive into Pinterest’s social media strategy and marketing tactics the brand used to become the giant it is today.

1. Learn more about the brand’s identity through some Pinterest statistics

With more than a decade since its initial launch, Pinterest has grown into the largest visual discovery engine, while becoming, altogether a great e-commerce platform.

Actually, according to Oberlo, 28% of marketers use the platform to promote various products.

But in order to deeply understand the brand’s expansion and usage of the platform, let’s quickly go over some Pinterest statistics that will reveal the brand’s position in the marketing world, and among all the important players of the world.

Here are some handy Pinterest stats to understand the brand better:

As Lyndsay McGregor, content marketing manager at Pinterest has told un in an episode from our podcast - The Life of a Social Media Manager - compared to all the other social media platforms out there, Pinterest is more of a personal media platform, instead of a social one.

How is that so, you may wonder?

When visiting the “home of inspiration” - as the internal team likes to call themselves people are looking for ideas that could integrate into their daily lifestyle. They are, nevertheless, picturing their lives.

If you’d ask me, this is quite a unique selling proposition!

However, just because Pinterest is a giant media platform on its own, it doesn’t mean they are not present on the other social media platforms as well.

But they’re the competition - you may think!

That’s true! But some of these social platforms also offer the potential of reaching a huge part of the brand’s audience.

LinkedIn, alongside Twitter, are the two leading social media platforms that Pinterest uses to promote its brand name.

LinkedIn is, without any doubt, the best platform for B2B marketing.

And with many e-commerce brands having great benefits as the result of creating a Pinterest marketing strategy and investing considerably into Pinterest ads, LinkedIn seems like the perfect platform to start looking for potential customers.

The brand’s LinkedIn content strategy focuses on trends and insights. 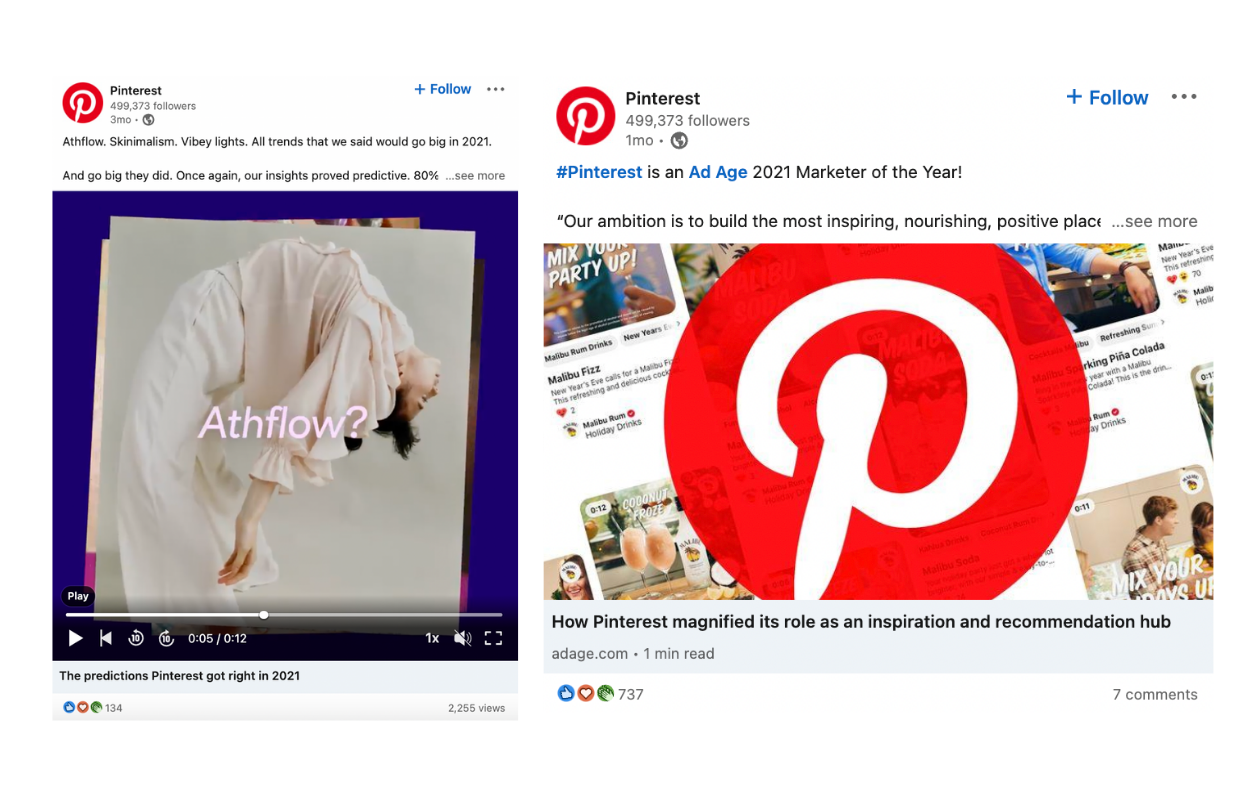 Since its LinkedIn audience is made out of decision-makers prospects, like other brands or agencies, Pinterest has a data-centered strategy.

On LinkedIn, Pinterest usually creates posts that highlight consumer trends to educate businesses about search behaviours on their key audiences.

Beyond the concept, Pinterest wraps its messages through either colorful, creative, and eye-catching videos or more informational pieces like re-shared blog articles.

Just by taking a peak, it’s easy to see that Pinterest's Twitter account stands out from the crowd from a mile away through a very well branded identity.

The brand uses a mix of short videos and images that are easy to recognize and associate with, thanks to its friendly, fresh, minimalistic, edgy vibe for its Twitter posts.

Although Facebook is not a high-priority for Pinterest, the brand could not miss having a presence on the the world’s biggest social media platform.

As shown, Pinterest likes to dive deep into the audience’s needs, preferences and habits, not only to create really targeted messages for its social media accounts.

The best example of the brand’s analytical skills when it comes to understanding the market, it’s a local campaign Pinterest launched in the UK in 2021.

Inspiration Nation is a marketing campaign the brand has come up with to gain insights into Pinterest’s UK users and their consumer behaviours to help marketers better shape their messages when doing Pinterest advertising.

As Lyndsay has told us, the launch of this campaign has started with a partnership with a local magazine from the United Kingdom.

The collaboration included hosting a webinar together, where Pinterest's audience study insights were to be revealed.

However, the campaign gained its most exposure through the creation of a dedicated hub on Pinterest’s website.

One of Pinterest’s marketing campaigns that gained massive exposure in 2021 was “You might just surprise yourself.”

It was designed to promote the expanded product discovery opportunities available in the platform, which also overlapped with the brand’s expansion on the Japanese market.

This integrated campaign ran across the United Kingdom and the United States and was developed by partnering with Creative agency Droga5, while global media agency Mediahub was behind its media strategy.

The T.V. and digital advertising campaign kicked off with a T.V. ad released in the United Kingdom, having many digital activations, incorporating audio, out-of-home, podcast, and social ads. 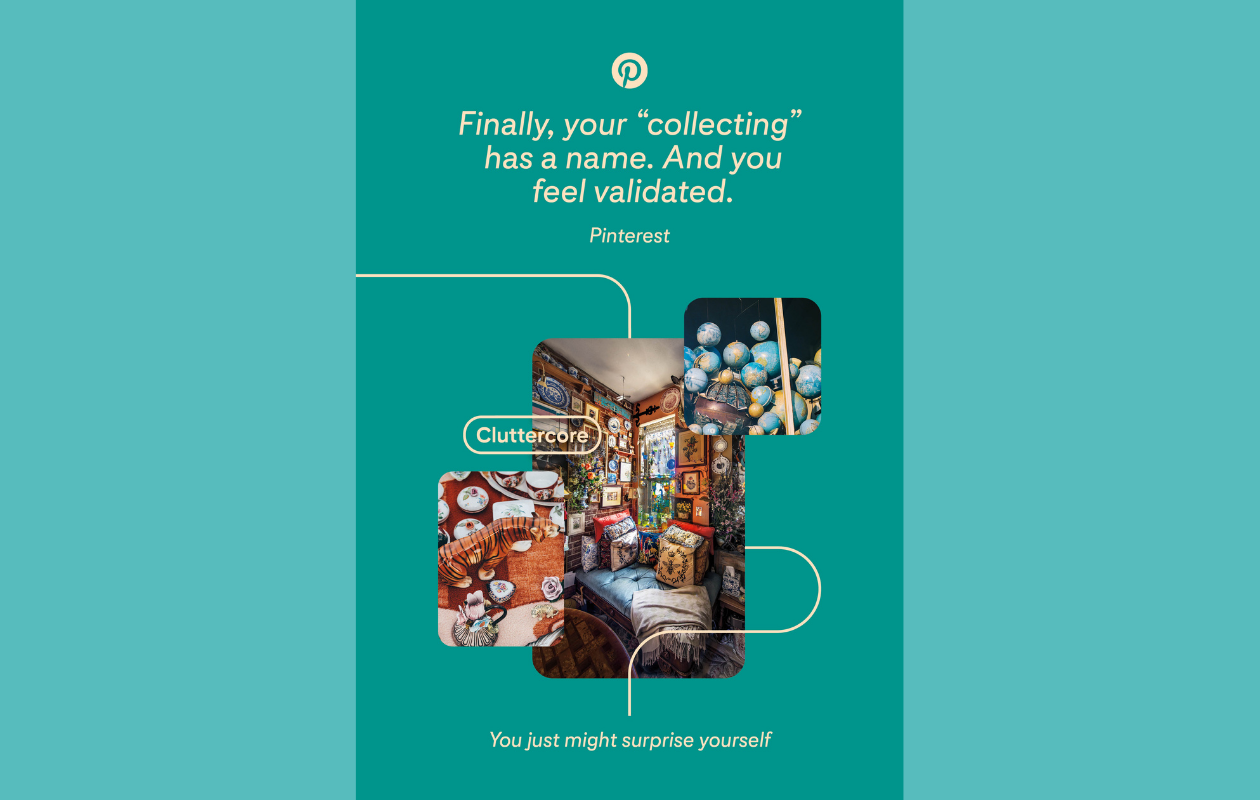 The campaign's centerpiece was a clip named "Discovery," and it was directed by Yann Demange, in both Mexico City and Los Angeles.

According to Pinterest the video it's meant to take the audience on "a fast-paced journey of exploration focusing on one woman's discovery before branching out into an unbroken, energetic thread of other characters' experiences."

And that's not all. A series of 15 films took this premise further, exploring the surprising leaps and ways people can expand their interests, thanks to the platform's increasingly smart interest matching.

Driven by a desire to spark inspiration in new ways, Pinterest expanded the campaign across all media channels, along with high-impact media placements and unique brand partnerships.

When it comes to marketing campaigns meant to unveil new features and launches, Pinterests’ skills are pretty hard to be outrun.

Starting with the COVID19 pandemic, people switched their lifestyle 360 degrees and populated the digital space more than ever.

And as a results, live webinars have become the brand’s newest way to remain connected with their worldwide audiences.

Which was exactly what Pinterest intended to do through this international marketing campaign. 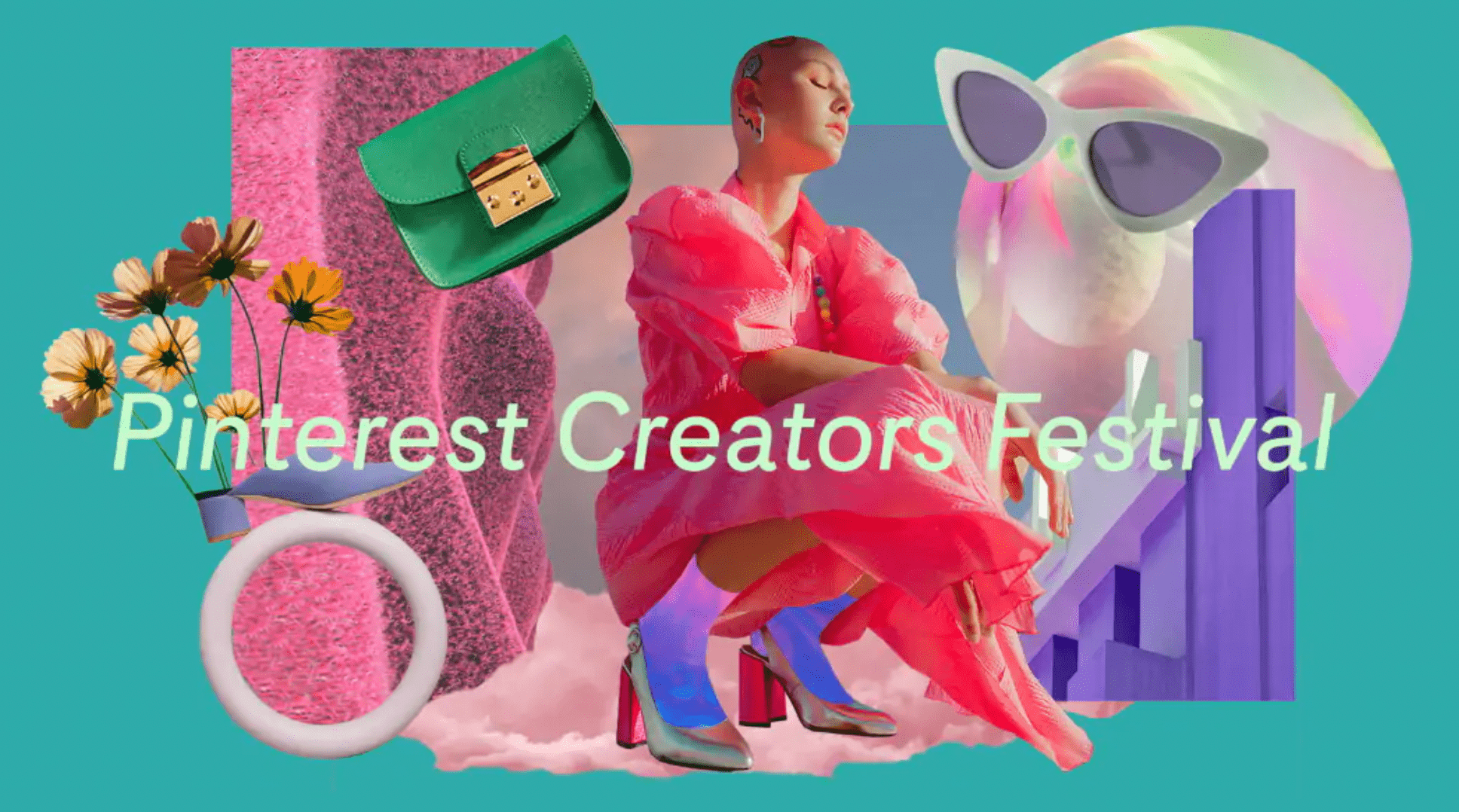 Meant to showcase the platform’s latest features’ updates without being overly promotional, Pinterest has interviewed many recognized talented creators on various topics like:

By highlighting the latest creative products, features, and worldwide known creator’s experiences, Pinterest also aimed to pave the way for the next generation of creators, and help them create meaningful engagement with their communities.

👉 "Pinterest is building a future for creators focused on inspiration over entertainment and reaching audiences in an engaging, positive and actionable space.

What makes the Festival so special is, we're handing creators the microphone to share our new products as well as offer guidance and help other creators be successful on the platform." 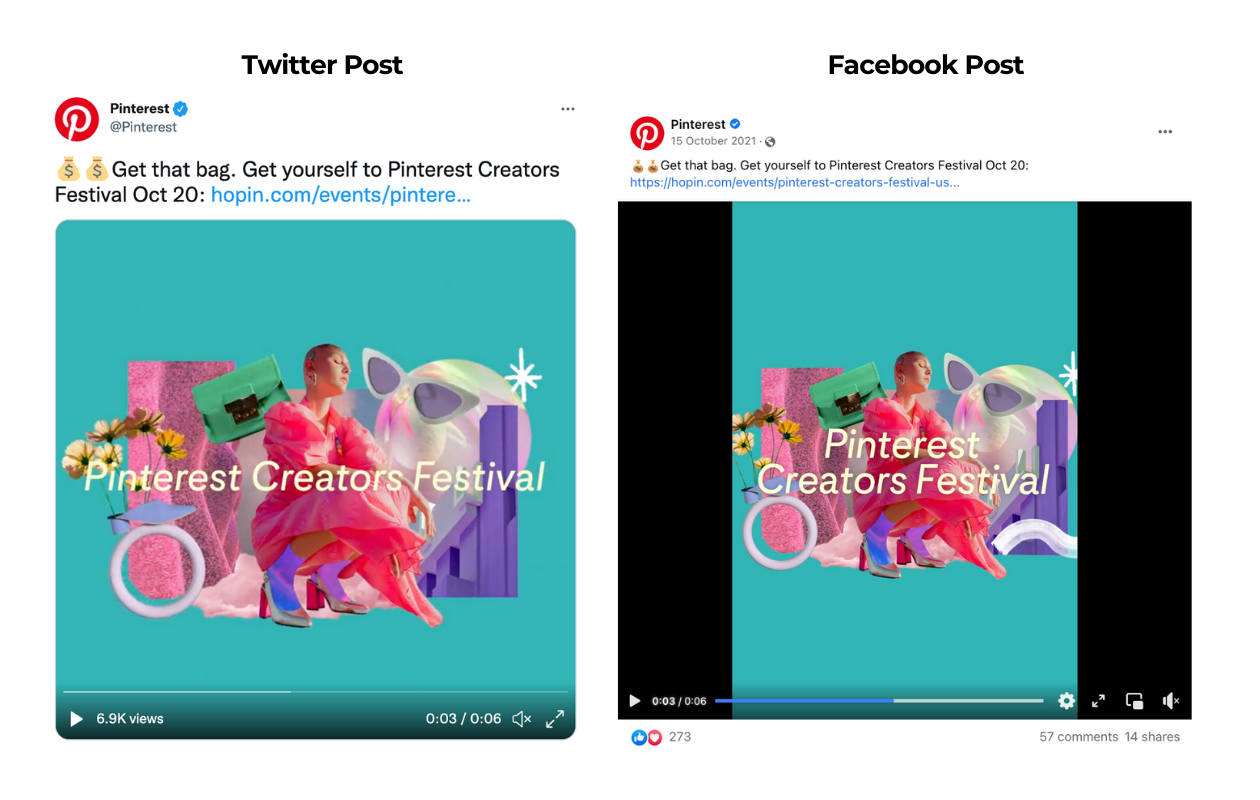 To promote this initiative, Pinterest has created a dedicated landing page, where future attendees could register to watch the webinars, and not only.

Pinterest’s social media accounts were also used to promote this marketing endeavor, with posts mainly on the brand’s Twitter and Facebook accounts.

As Lyndsay herself told us, other social media lessons you can learn by analyzing Pinterest's marketing strategy would be fostering cross-functional collaborations and creating fresh content weekly.

Its solid visual appeal made Instagram Pinterest's number one competitor among all the other social media platforms. Which made us wonder, how are the two of them positioned in other social networks?

Just a thought  - to see how different brands representing two different social media platforms perform on other networks as well, it's a much curious thing.

And since Twitter and LinkedIn are the platforms that interest Pinterest the most, we'll apply a brand comparison on the performance of this two.

Starting with a platform's performance analysis for Pinterest, why the brand has chosen these specific networks to orient its social media efforts becomes quite clear.

While Pinterest has a more extensive following on Twitter, LinkedIn has proven a much better platform in terms of engagement. Which is kind of obvious - given LinkedIn's more business-oriented positioning.

But despite that, on Twitter, Instagram seems to have gained a more significant following and a more engaging community.

However, Pinterest's more niched audience can be a good explanation for this.

What comes as a surprise is that Instagram does not have an active presence on LinkedIn.

5. Bonus: tips to create a marketing strategy for Pinterest

The reason marketers in particular, like Pinterest, is very much related to its ability to create a positive sentiment that drives people throughout the purchase funnel.

One of the main reasons - if not for most brands - for e-commerce brands in particular of why they should have a Pinterest marketing strategy is because Pinterest users are specifically looking for what a brand has to sell.

Therefore, with smaller efforts compared to other social platforms, you can increase your click-through rate and eventually your company’s profits in a quicker way by having a Pinterest marketing strategy.

When doing Pinterest marketing, just like on any other social media platform, every brand must have a solid strategy based on research and data.

To help you build up your Pinterest strategy and build a community around your brand, here are a couple of tactics you should experiment with:

More general tips for your Pinterest marketing strategy would also be two essential elements of every marketing endeavor: tell a visual story and humanize your brand!

Remember that authenticity as well as getting creative never go out of style!

There you have it! The most important Pinterest marketing strategies that have turned this brand’s name into a reckoning one.

Suppose you’re thinking about adding marketing on Pinterest to your overall social media strategy. In that case, you can start integrating some of the tactics the brand itself uses for promotion and mixing them with the Pinterest marketing tips that we shared.

Get started with Pinterest marketing to boost conversions, increase sales, and grow your business to match Pinterest's own brand performance!