Social media marketing is an area in which brands endow a big deal nowadays, because of its capacity of rapidly and easily connecting them to their targeted audiences.

So, when you’re in charge of managing marketing budgets, the pressure is huge, especially if we think about massive brands that invest in digital, maybe more than in any other field. In this case, we’re talking about social ads.

Every marketer knows to which two social platforms the marketing budget is directed to when it comes to social media ads.

And, as a result, an important question that immediately pops up is which ones perform better, both in getting the results wanted, as well as in optimizing costs.

Follow me in this initiative of doing a comparison between Facebook ads vs Instagram ads and let’s discover the secrets of a successful social media ads optimization campaign!

Given the fact that it’s one of the oldest and definitely the largest among all social media platforms nowadays, it doesn’t come out as a surprise that Facebook is the number one platform that businesses invest a lot of money into.

For being more appealing to a younger audience, to those digital natives brands dream of having in their corner, a huge amount of money is invested into Instagram advertising also.

Compared to the giant platform, the budget directed towards Instagram ads is only half of the budget allocated for Facebook advertising. 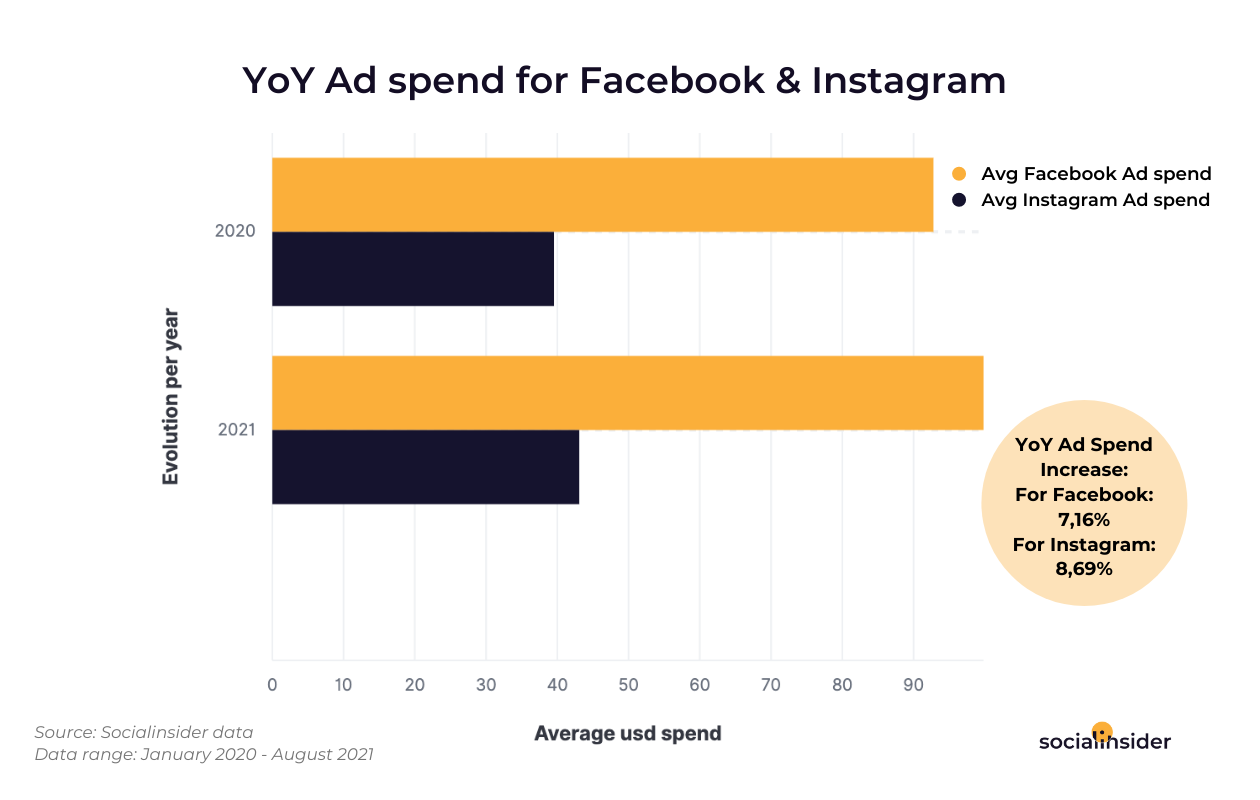 The reasons for which businesses try to swim their way into their audience’s lives through Facebook and Instagram ads is because they can connect the brand with a lot of prospects in a matter of seconds, offering a great boost in the purchase process.

But enough with the chit-chat, let’s talk numbers a bit.

This can only mean that brands are increasing their attention into prioritising a greater marketing focus and budget investment into Instagram in the future, since it is, after all, the platform with the highest engagement rate at the moment.

Thus, the remaining questions are: is Instagram soon to be the platform into which brands will direct most of their marketing budgets, for creating Instagram ads? And if so, when will that happen?

Now that we’ve seen how much brands rely on Facebook and Instagram ads, by looking at the money put on the table for social media advertising, it’s time to go even deeper into the matter.

In order to decide if it’s a good call to invest in either Facebook or Instagram ads, you must take a look at some specific ads metrics, like the average cost per click, also known as CPC. With Instagram, on the other hand, it’s another story.

Given Instagram’s younger audience, formed of people that not only want to check in on their friend’s lives, but also to have fun or get inspiration for different areas of interests they may have, the platform tries to offer a more authentic experience.

Which means a lesser desire to deliver social media ads that will break that more intimate feeling for the user, and as a result, a bigger price for doing it.

After taking a look at the overall prices for social media advertising on both Facebook and Instagram, it’s time to see which are the most efficient ones.

We saw that Instagram ads are more expensive compared to Facebook ads, by examining the average cost per click, and we also came up with some good explanations for the findings.

But since many brands invest a huge amount of money into both Facebook and Instagram ads, optimising those marketing budgets to make sure you obtain a satisfying ROI is crucial.

That’s why we must stop and think: given their higher cost per click, are ads on Instagram the most efficient social media ads?

Well, in analysing the average click-through-rate, which is a strong indicator of how likely you’ll get the results wanted from a social media ad campaign, we discovered that Facebook ads perform way better than Instagram ads. Now, this is not a very surprising discovery given the fact that Facebook is a platform with a longer history and with a much bigger interest in doing online advertising.

After all, it is the network that has developed far more placements for social media ads, let alone the fact that it is the first social platform that introduced them.

The last thing worth mentioning is that, from a glance, despite some small spikes, overall the average CTR for Facebook ads seems to have a decreasing direction.

4. On Instagram, the feed is the ad placement most brands orient their budgets into

Over the years, even before being bought by Facebook, Instagram has many times wowed its users with a lot of cool and inventive features.

This has allowed marketers to tailor social ads according to their brand’s needs, and of course, the user’s as well, and also to get more creative with social media ads.

But you know what they say, oldies are goldies. And that’s exactly how brands seem to see Instagram’s very first feature, which is the feed, when it comes to preferred placements for their ads.

Though, Instagram stories are not very far behind. Since this is one of the most liked Instagram features, it is a good thing that businesses really explore its potential. 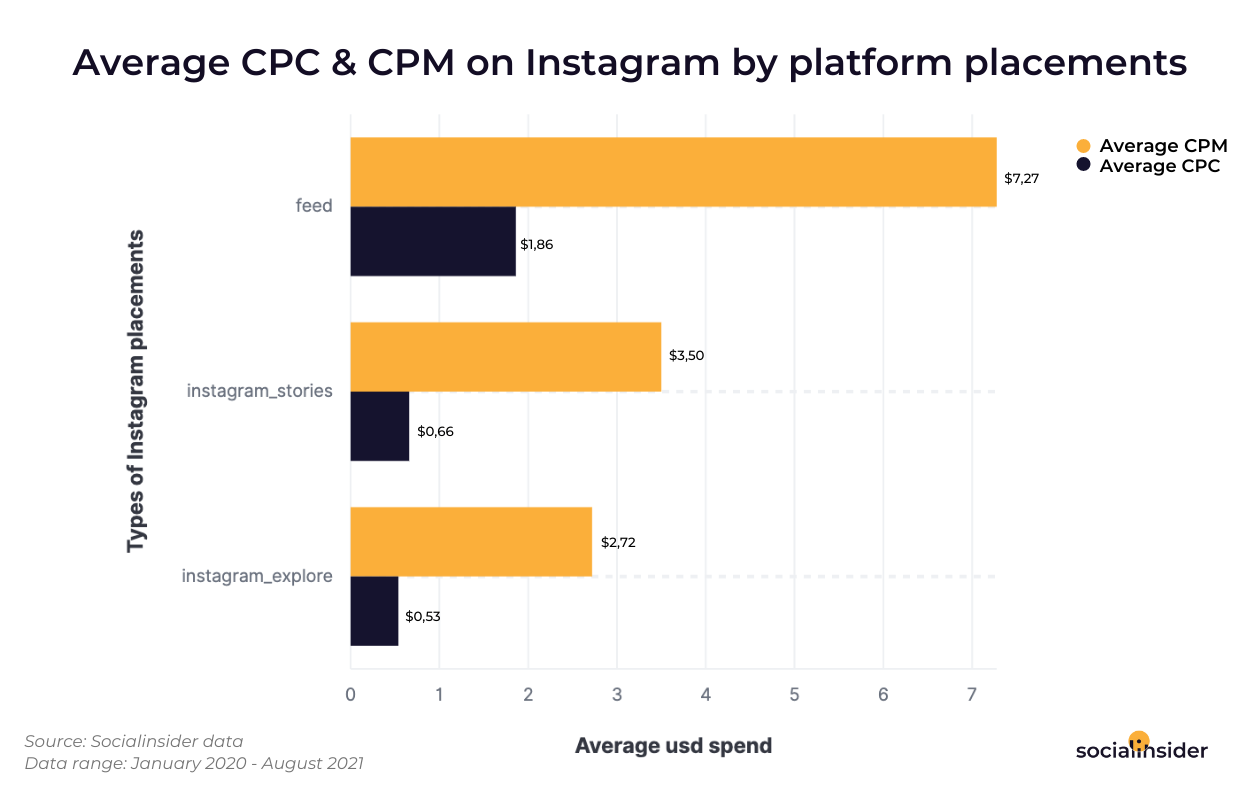 The other placements seem to have only half of the feed’s values as follows:

So, on that note, we must take a look at the average click-through-rate to see if this makes any sense.

Instagram feed, in which many brands invest the most for their Instagram ads campaigns comes second, having a slightly lower average click-through-rate, of 0,69%. 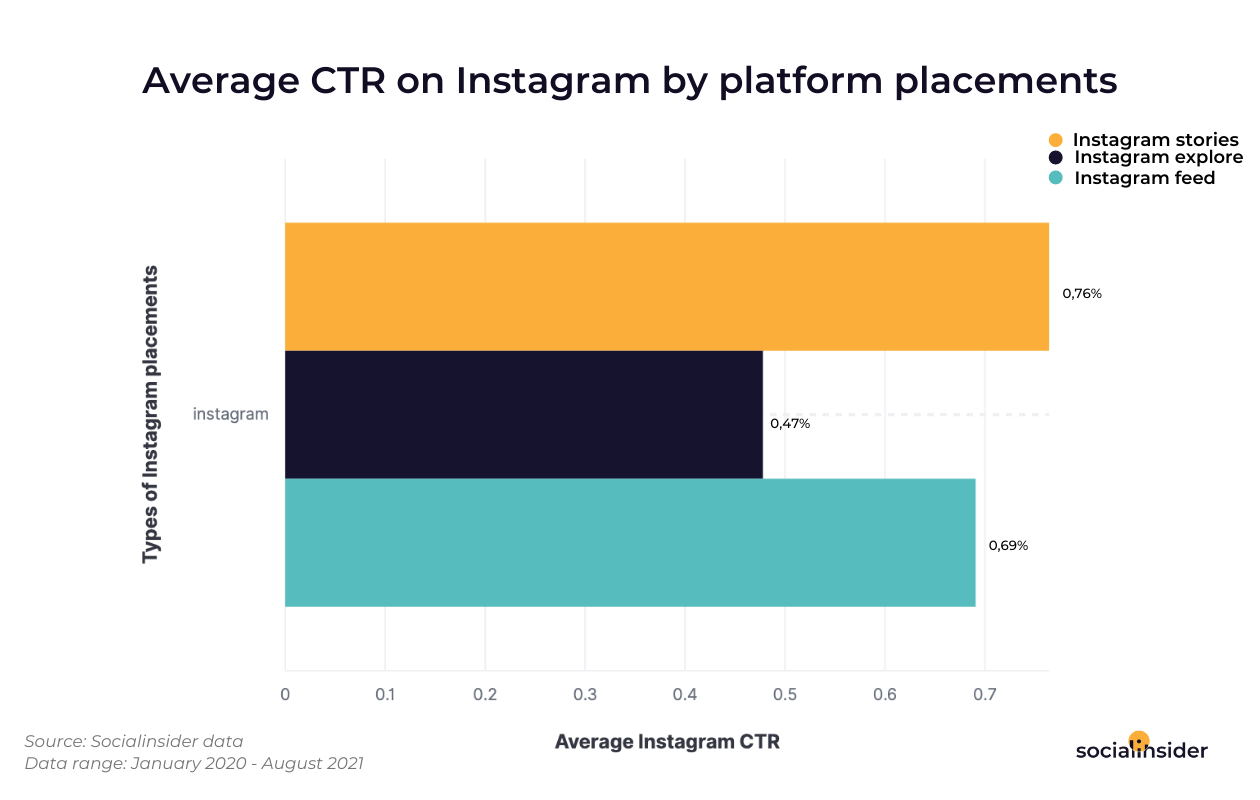 Although the difference between those two Instagram ad placements is not that big, brands can have a better chance at improving their ROI if they would adjust a bit their marketing budgets and direct more money towards the Instagram story ad placement.

Lastly, for those who were counting on placing Instagram ads in the Instagram explore section, the average CTR for this type of social media advertising is 0.47%.

6. Facebook feed is the number one ad placement brands invest in

Let’s be honest, regardless of how many cool features any social media platform may have, the feed will always be the place users spend most of their time when they are online.

That’s why just like in Instagram’s case, on Facebook as well, the ad placement in which brands invest the largest amount of money is the feed.

But there’s still an element of surprise from this analysis - the choosing of the Facebook ads placements that come in the second and third place.

It seems that in 2021 brands have acknowledged videos matter a lot. Our own latest Facebook videos study has shown why it is a type of content that performs well.

And so, businesses have started to bet on this approach, by investing some money into that ad placement that is thought especially for those users that love video, and spend a lot of time navigating through - the video feed. 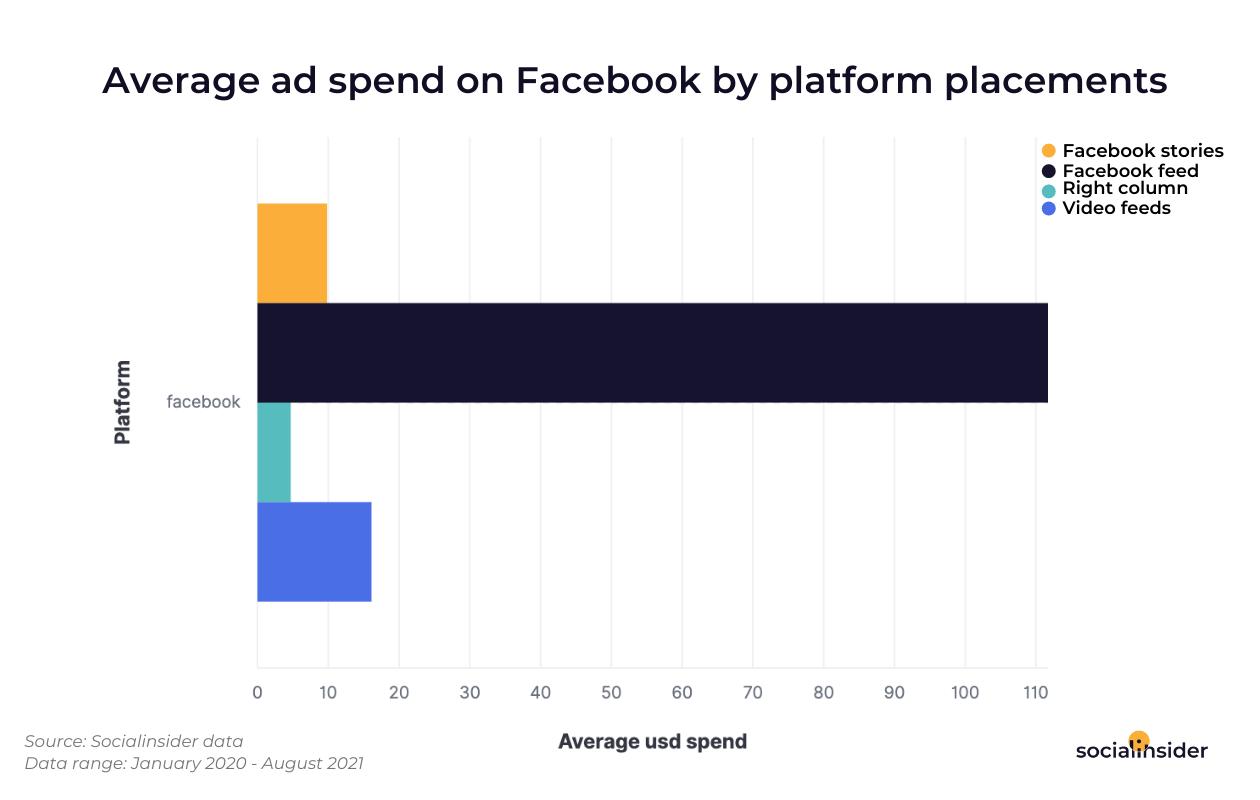 Because stories are a shared type of content, it makes the perfect case for identifying the differences, hence the needs and orientation of the both social media platforms for our Facebook ads vs Instagram ads comparison.

We just saw earlier where brands stand when it comes to choosing different Facebook ad placements to have their budgets directed towards.

But as any digital marketer that has the mind in the game knows, when picking those up, a series of factors need to be taken into consideration, and metrics like the average CPC and CPM analysed.

Well, this is surely an interesting hierarchy. After seeing these numbers, a quick analysis of the average CTR is needed, as it will reveal if and where businesses nowadays need to adjust their social media advertising strategy. 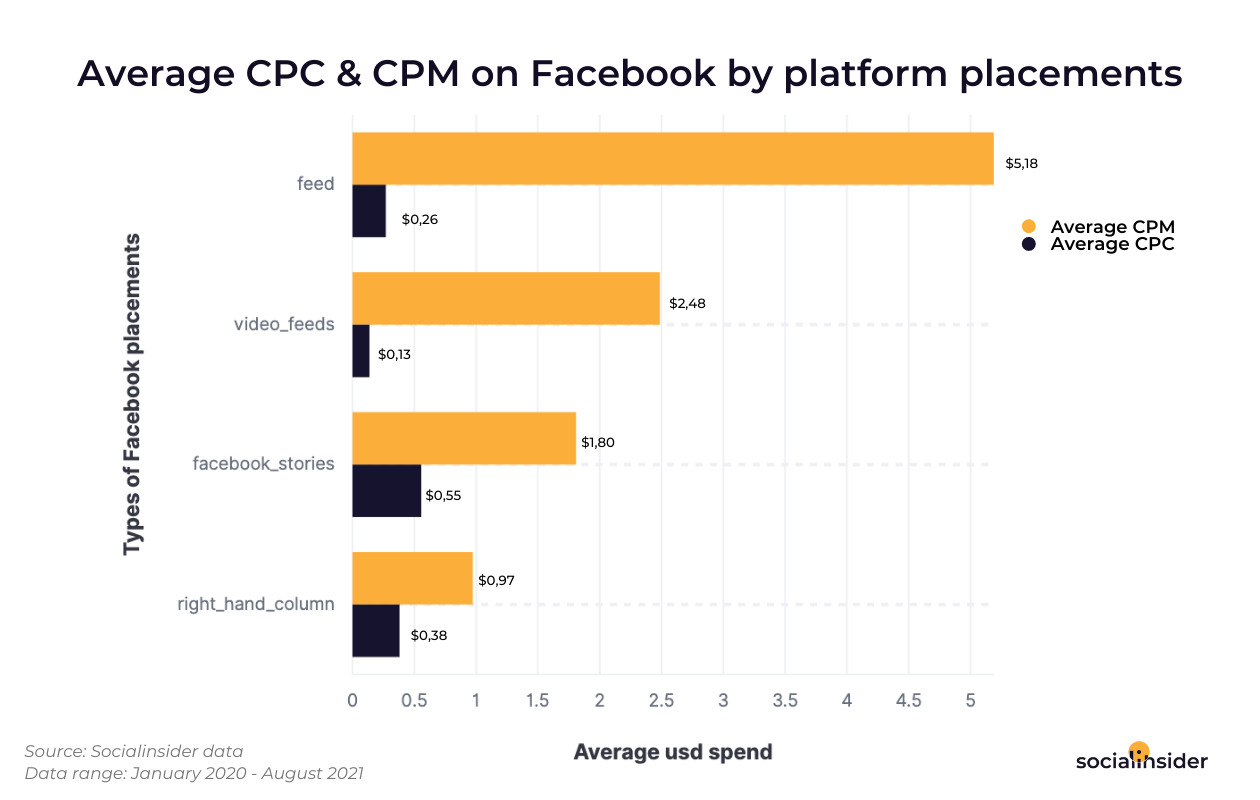 Let’s not forget that since your business goals for different ad campaigns can be so many, the metrics you’ll have to prioritise in monitoring will have to be different as well.

If you're thinking on a big scale, and especially when your primary objective is to generate awareness for your brand, an important metric you should look at is the average CPM.

All in all, a brand’s ultimate goal is to make its customers convert. Actually conversions make for almost a quarter of the main campaign objectives brands set for their social media ads.

And by taking a look at each Facebook ad placement’s potential of converting, it becomes pretty clear why the marketing budgets are divided the way they are.

The first two positions for the best placement on Facebook ads are actually the Facebook ad placements in which brands invest most of their social media advertising budgets into, as in:

But what comes as a surprise is that Facebook stories is surpassed even by the Facebook right column as an ad placement in terms of a greater CTR.

Who would have seen that coming, especially given the Facebook story's higher CPC and CPM? 👀

In the section below you’ll find both an estimated ad spend per region and a CPC per region as this is calculated based on the data pool that exists in our tool's records. 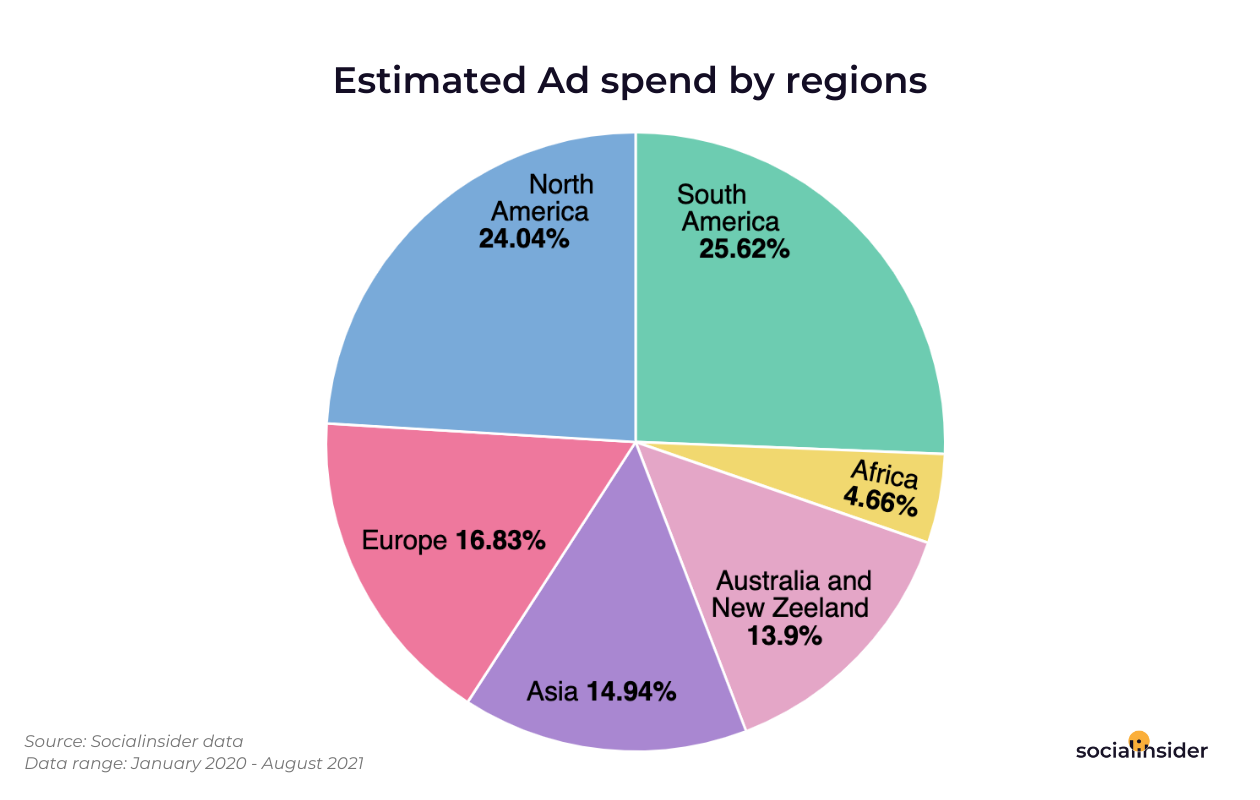 To obtain a general understanding of the ad spend, CPC, and CPM, all currencies were exchanged to US dollars. 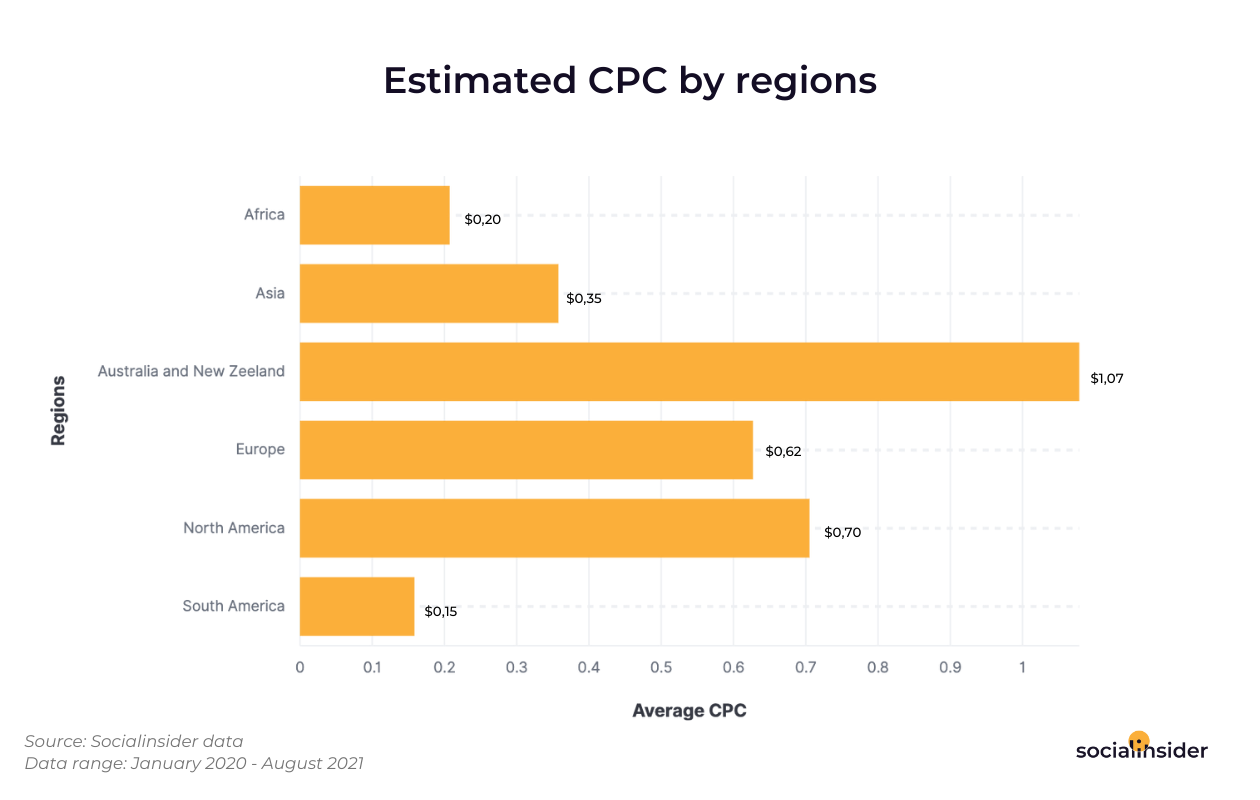 Socialinsider defines the cost per mille (CPM) as the cost per a thousand impressions. As defined by Facebook, CPM measures the total amount spent on an ad campaign, divided by the number of impressions, multiplied by 1,000.

The number of ad impressions represents the number of times an ad was displayed on screens.

Click-through-rate (CTR): shows the percentage of people who clicked on an ad, and is calculated by dividing the number of link clicks on an ad, by the number of impressions.